I’ve seen three HGL movies so far, each its own unique beast, some working better than others. One was a splatter picture, one was a roughie, and one was a splatter picture with a southern bent. Also, I’m apparently now calling all movies “pictures”, presumably because I’ve fallen into Herschell’s trance where he somehow makes all these brazen, borderline disgusting movies seem like innocent little experiments that, given only the passing of time, should now be considered art. And I think I’m starting to agree with him.

I need to get a couple caveats out of the way regarding Arrow’s restoration of Moonshine Mountain on their HGL Feast Box Set. Mainly, the original prints of this movie don’t exist anymore, so this version is sourced from a variety of places, including old videos. There are frequently dropped frames that result in jumps in the sound, and potentially some scenes that are missing all together (though with Lewis’ often loose storytelling style that’s harder to pin down), and certain portions couldn’t really be color corrected all that well. In general, this is a bit of a mess of a restoration (though likely the best Arrow could do with what’s available) that made the film somewhat difficult to watch, and definitely difficult to follow as certain seemingly important exchanges were lost in a wash of garbled sound and dropped frames. This was actually true of Two Thousand Maniacs! as well, though not nearly as prevalent – I felt like I got the full experience out of that film so I didn’t address it. 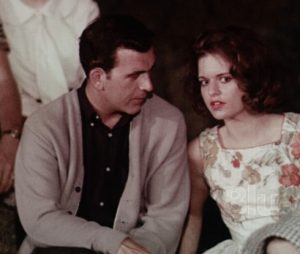 While we’re on the subject, another thing I didn’t mention about Two Thousand Maniacs! and is also true of Moonshine Mountain, is that Lewis himself wrote and performed the theme songs for these films. Nothing delights me more than finding out a filmmaker I’m fascinated with also writes their own theme songs (see: my love of Jackie Chan and recent discovery of his illustrious music career), and after only two I feel like I can confidently say HGL is the GOAT of personal movie themes. His theme for Two Thousand Maniacs! (credited to the Pleasant Valley Boys) is almost more memorable than the movie itself, and the theme from Moonshine Mountain (I believe called “White Lightning”, though information on these songs is difficult to find) is definitively one of the best things about the movie. I don’t think either of the linked versions are the ones from the actual movies unfortunately, as you can tell they’re performed by a young Herschell in the movies themselves, but they at least give you an indication of how good a songwriter this guy is (and exactly how tongue-in-cheek his sense of humor is). I honestly think he might’ve made a better musician than filmmaker, though we’d then be without one of American cinema’s greatest troublemakers, and I think we can all agree we prefer the troublemaker.

With all that said, here’s what you need to know about Moonshine Mountain, a movie I didn’t really care for, mostly because it was boring. According to our good man Herschell, some producers came to him, high on the success that Thunder Road had had in the South, asking for a new “southern picture” to capitalize on. Having just completed Two Thousand Maniacs!, which itself is a southern picture of sorts (though it doesn’t particularly paint the South in a good light) HGL thought he could accomplish such a thing quite easily. Especially since he had worked with Charles Glore on his last picture, a guitar player with dreams of stardom and a script in-hand about a country-folk star who returns home to one of the Carloinas to get back in touch with his roots before setting out to make his next album. That seemed like a good enough premise for a Southern picture that HGL could sell to these producers, so he ran with it and even let Glore star in the film (under the name Chuck Scott).

And Herschell really comes out of the gate swinging, attempting to appeal to his hopeful audience of southerners through a credits sequence that is genuinely hilarious in its attempts to pander. We all went ape-shit over that Deadpool credits sequence last year, but guess who got there first? With credits like “This here story was writ by hand by Charles Glore” and “Andy Romanoff… Sound Recordist who erased most of it”, Lewis tries desperately to signal the audience he’s hoping to find and ends up creating the best sequence in his movie on accident. He even seems to recognize this when he credits himself as “Produced and Directed by Herschell Gordon Lewis who ought to know better but don’t”. I say it’s the best sequence in his movie because what follows is a boring and unfocused movie, but typical of HGL, one with many moments that likely would’ve played well with a crowd. There’s a struggle between HGL’s sensibilities and Glore’s script that is more entertaining to think about than it is to watch. It’s sort of fascinating to me – the first half of the film feels very much like it holds true to the script Glore wrote. There’s a self-awareness to the idea of a rich music star returning to his lower-than-low-income hometown to “reconnect with the real people.” He’s constantly assuming the townsfolk are happy idiots and underestimating them, and the movie is full of moments where it’s clear his lack of self-awareness makes him dumber than they are. I like that it attempts to show a respect for the people of the South in this way.

Yet, this is undeniably a Herschell Gordon Lewis movie. He has the actors portraying the good southern townsfolk act like brain-damaged cartoon characters that then break this mold only when Glore’s script calls for it. While the story seems to have respect for them, the performances themselves are completely disrespectful. And as the movie moves into its second half, it breaks away from what feels like constant musical numbers and small character moments that reveal the hospitality of these Southerners, and becomes a full on HGL sleaze-fest. It’s essentially a remix of the three films of his that I’ve watched previously from the set – a southern-tinged roughie with some brief moments of splatter. At the halfway mark, the town Sheriff enters the movie and completely takes it over. He’s a villainous drunk that rapes multiple women over the course of his 45 minutes in the movie (including one that is explicitly mentally challenged) and murders anyone that gets in the way of his nefarious activities. He then either buries them, or hides their body in the 30-foot still he makes moonshine in. There’s little doubt in my mind that this second half of the film is mostly Herschel’s doing and a departure from Glore’s script. The two halves of the film feel completely different and almost separate from one another, practically abandoning Glore’s character as the lead and shifting the focus almost entirely to the sheriff. 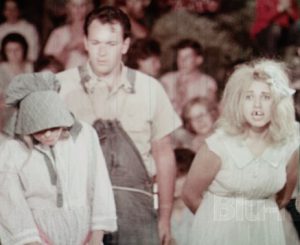 At the end of the day, it feels like a cobbled together mess that doesn’t really work for me on any front. At only 85 minutes, it feels quite long as there’s just very little to latch onto. Even when it finally gets to its finale and truly becomes an HGL picture with some graphic, bloody violence and a bananas foot chase, it just doesn’t work like it did in his previous efforts. It all feels a little stilted and unexciting. And it really is starting to feel like the man has a fascination with rape, or at the very least unabashedly and unashamedly uses it as a tool to add stakes to his stories, which is both cheap and disrespectful, in that he doesn’t give it the weight and gravity it should have, nor does he usually give the victims any kind of presence or voice. I’m trying my best to stay on board with you Herschel, because I like your attitude and the spirit of these movies. But for the love of God please stay away from these “for a paycheck” movies, stop adding rape to the proceedings for no reason, and get back to trying to say something like you did with Two Thousand Maniacs!. So far, that’s been you at the top of your game. Stick in that realm and I’ll be able to defend our premise here – that splatter does indeed matter.