After a rough start, Herschell finally came through for me and made what I think is a great splatter film in Color Me Blood Red. I’m starting to tune into his frequency now that I’m deeper into his filmography, and the scrappy nature of these pictures has really become appealing to me. And that’s going to be very important when it comes to appreciating this next feature. 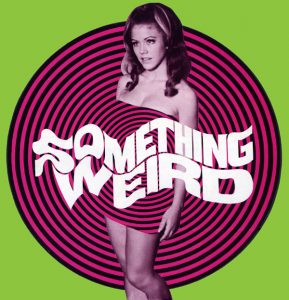 Something Weird is, as Herschell puts it in his introduction to the film on Arrow Films‘ HGL Feast Box Set, “a movie that does not betray its title.” This is something you’re going to have to accept before sitting down to the film, as it is indeed very weird, in its own, peculiar, Herschell way. It’s not that the premise of the film is weird (though it is, and actively silly as well) but that the choices made to bring this mad vision to the screen are the kinds of choices you might expect a middle schooler to make for a class project. In particular, there is a witch at the center of the story that needs to appear as a beautiful young woman half the time, and a haggard old witch otherwise. This is accomplished by painting a young actress (the stunning Elizabeth Lee in her only film role) green, having her do a voice that would only work in a Saturday-morning-cartoon, and for no reason at all painting lips on her right knee cap. It is laughably absurd, and is introduced early enough that you’ll want to turn off this amateur production almost immediately.

But if you just accept it, the movie ultimately has a really fun premise and becomes a pretty hilarious watch as they vacillate between trying to take things seriously and just being over-the-top goofy. It takes quite some time for it to fully divulge what that premise is, and I suspect that has something to do with the film’s production, which Herschell details in his introduction. The script was written by James Hurley, who HGL describes as a college faculty member obsessed with the concept of psychic power. According to Lewis, Hurley “disagreed with changes we made to make it more of a movie and less of a lecture on ESP.” Lewis explains that this resulted in Hurley making his own film, The Psychic (which HGL was a camera man on) “which was made only because he felt we had not been psychic enough in making Something Weird. But we made up for it – we were weird.” You can feel this push and pull of creative vision in the film – it goes from a movie about a self-obsessed man who gets psychic powers from being electrocuted in an accident to a movie about a witch and a “sensitive” that become pseudo-detectives on the hunt for a serial killer in the Midwest. These ideas all eventually coalesce into a blend of 60s pop-psychology that is hilarious and fun and makes its own sort of sense, but for a long time the movie struggles to find its tone or even make much sense as it just bounces around between characters and ideas that lead to dead ends.

This review will get away from us all very quickly if I don’t lay out the basic concept and the main players here. The film is about Mitch (Tony McCabe), an ordinary guy who gets disfigured when he’s electrocuted in an accident, but also receives very powerful psychic powers, often referred to as ESP throughout the film. He’s deeply embarrassed by his facial scars, so when Ellen (the aforementioned Elizabeth Lee), a witch, shows up at his side-hustle as a psychic and offers to make him whole again in exchange for his eternal love, he accepts. While Mitch’s ESP is very real, and truly powerful, allowing him to see into people’s past and future just by touching them, Ellen’s witchcraft can be used to trick people into seeing things they are not, which the pair quickly realizes can be used to create a lucrative partnership. She’s able to make herself appear as beautiful young woman and assistant to Mitch and then trick people into thinking that his psychic powers also allow him to speak with the dead. From there, the pair begins helping the police to investigate and solve crimes, eventually leading them to a small town in the Midwest where seven women have been murdered and the authorities suspect they have a serial killer on their hands. The government becomes interested in the pair and sends Dr. Alex Jordan (William Brooker) to investigate Mitch, “the sensitive”, and determine if his power is real or not.

This all leads to tragedy for nearly everyone involved, though as things go on it becomes clear that they each deserve their comeuppance. It’s ultimately a movie about fate coming back round to make you pay for your self-righteousness, and in that way another interesting step forward for HGL and his storytelling. The film has a twist ending in which the killer is revealed to be a schizophrenic detective from the local police force, who Dr. Jordan allows to murder Mitch so that he can have Ellen for himself, only to discover that she’s an ugly witch, and not the beautiful young woman he’s fallen for. It actually works really well, even if you’re howling with laughter like I was at the absurdity of it all, and really is quite the spectacular ending for a Herschell movie. He even ends the film in what has now just become the patented HGL-foot-chase-climax, but it’s far away his best one yet, full of dynamic settings and a lot of edits – it’s legitimately exciting for the first time in his filmography. The film is without a doubt another step forward for him, even though it’s so crazy silly that it’s mostly laughable as opposed to as interesting as its premise makes it sound.

No matter what I try to use as an example of his growth here is also going to be an example of the film’s goofy nature. There’s a pretty great sequence in the middle of the film where Mitch does LSD that Dr. Jordan provides him (this is an actual line from the movie – “Mitchell, I have a drug here, LSD, perhaps you’ve heard of it?”) because somehow Mitch tripping on LSD will help Jordan determine if he’s really a psychic? When Mitch finally tries the LSD, we’re treated to a sequence that has a deep red filter on it where Mitch is taken the site of the murders and sees one of the dead women, eventually meeting her killer, Detective Maddox who has been leading the case and admits to having a split personality that has been perpetrating the murders, just before shooting Mitch in the face, ending the trip. The dead body itself is a great practical effect and really gruesome, all helped by the red filter on the scene. When he meets Maddox, who will eventually reveal his schizophrenia, HGL layers four frames on top of each other, all slightly off center in different ways, physically representing both the LSD trip and Detective Maddox’s condition. It’s a really spectacular sequence, and were it not for the dialogue that precedes it, it would be my favorite thing in the film.

I now present to you the conversation in which Mitch reveals that he’s onto something to Detective Maddox, just before trying LSD and having Maddox revealed as the killer.

Maddox: Why has it been so hard for us to get him? Seems to me that an insane man would leave more evidence than a normal one.

Mitch: Well that’d be right in most cases, but I sense that our killer isn’t insane all the time.

Maddox: Ah come on Mitchell, what kind of a reasoning is that? Either a man is normal or he’s NUTS! You don’t turn it off and on… like a faucet!

Mitch: Look Maddox! I’m a psychic not a psychiatrist, but I can sense that this man is a schizophrenic.

If I haven’t made this sound weird enough yet, it’s because there’s no good way to bring up the fact that Dr. Jordan is also a black belt in karate that fends off assailants in an alley-way at one point. Or that he also fist fights his blanket after it tries to choke him, thanks to some of Ellen’s witchcraft. Or that for no reason at all Mitch becomes a part-time ghost hunter on the side and tries to keep it from Ellen (allowing for a truly great special effects sequence with a ghost). Or that guns don’t make gunshot sounds in this movie – they either make surf-guitar riffs or drum hits.

Herschell is right – this truly does live up to its name, going for broke when it comes to weird. And in doing so, I think he’s got a another movie that would be a laugh-riot with a crowd, and actually has some fun ideas at the heart of it. If nothing else, I can say that I whole-heartedly agree with the film’s tagline, featured on a poster in the intro to the film – “Makes Blood Feast look like a Sunday School coke party!”

And of course, as always, Splatter Matters.