We do this just for you.

Listen PUFF, I know that’s not true, but goddamn do you make it feel like it’s true.

Day 3 of Philadelphia Unnamed Film Festival was jam packed, not just with movies, but a crowd that hung around all day. And boy were you rewarded if you did – the folks at PUFF put on a masterclass in programming yesterday, delivering three features that couldn’t be more different from one another, and yet are so thematically linked you’d think they were made specifically to be part of this triple bill.

We started early in the afternoon with a short called Death’s No Fun, directed by Susan Chasen, which was animated by hand in a very simple, but effective manner. This one didn’t land for me like some of the others have, but the story of a young, female protagonist who gets more than she bargained for when trying to prove her strength as a person was exactly the right way to kick off the day’s programming. Following the short was the first feature of the day, Spookers, directed by Florian Habicht, which is a documentary about a haunted house attraction in New Zealand, which appears to be the like the one at Eastern State Penitentiary on steroids. Similar to Eastern State, the location for Spookers is an old psychiatric institute, and the film dives into the history of the institute and the grey moral area that hangs over the whole notion of portraying “psychopaths” in the manner in which they’re presented in horror films at the locations that actual patients were being treated. But what’s great about this doc is that it doesn’t get bogged down in these questions or even come down on one side or the other, it simply allows its subjects explore them. And the subjects of this doc are the performers who put on elaborate make-up to be the scariest fucking thing you’ve ever seen and terrorize you in the attraction. Much of the screen time is dedicated to their personal stories, which they relay while still in their make-up. It’s a fascinating dichotomy, and as you would expect the stories of these people, and why they enjoy this work, are deep and ultimately enriching. The movie is a bit padded out with bizarre dance sequences and re-creations of dreams that the filmmaker keeps asking people to relay to him, but the subjects of the film are wonderful characters to spend time with, and above all else it set the stage for more features to follow.

We were next treated to the International Oddities short block. It started with an Israeli film called Get Yourself Together, Mikey (which is also covered, along with a few of the other shorts mentioned below, by Doug in his round-up of some of the fest’s best shorts), which I thought was excellent. Directed by Dana Frank, it’s a dramatic short with a horror twist to it that isn’t apparent in the first half of the film. The performances here are just stellar and at only 20 minutes it feels full and complete. Next was an American film, The Call Girls, directed by Justin Staley who was in attendance and said his film, about a man that is drawn into a hive of women that ultimately rob him of everything he has, including his life, was based on a nightmare he had and inspired by his favorite genre – “insect b-movies”. He produced some original music for it to serve as the narration, and it’s as good, if not better than his movie. This was followed by Travis Tillman’s Beacon, another American short, this time a sci-fi story of a man who has crashed on a distant planet and is running low on oxygen, unable to keep any vegetation alive, and still desperately trying to find a way home to his wife. This short looks fantastic and makes a hell of a lot out of seemingly very little. This was followed by Heir, a Canadian short directed by Richard Powell which I found very upsetting. It uses what appears to be the sale of a child for sex to tell a sci-fi laden horror tale, but because the end doesn’t make it clear what the alternate reading of this is (which I think the ending is intended to do) it’s just a super difficult, uncomfortable watch.

The last three shorts were the best of the block. What the Cat Dragged In, an American short directed by Isaac Ruth, is a really funny story about fighting depression and the strange places we may find ourselves in during that battle. This short has excellent pacing, a funny central performance, some great writing, and a surprise ending that is just a blast to see come to life. This was followed by Times of Zoe, directed by Tim Carlier of Australia, which may have been my favorite short of the day. It’s a sort of wistful comedy about humanity’s struggle to find and understand god, the places we have gone and will continue to go in this pursuit, and the ultimate futility of that exercise. I thought this movie was just spectacular – it spoke to a lot of my more existential stresses, but with a light touch and tone that made those anxieties feel manageable. The block ended with the Philadelphia-based horror short I’ve Got My Mind’s Eye Set on You (and part of me knows what you’re thinking), directed by Samuel Valenti. It’s about a young woman that thinks – no, she knows – she just absolutely knows that her boyfriend is cheating on her, but he manipulates her into thinking she’s crazy for even entertaining that idea. It’s essentially “gaslighting: the movie” and it is extremely stressful to watch, perfectly capturing what that feeling of being trapped must be like. And to continue to compliment PUFF, this dovetails perfectly into the days next feature.

That feature was Charismata, which is an excellent title that is kind of impossible to understand until you’ve seen the film. Directed by Andy Collier, who was in attendance to talk about his film, Charismata is a police procedural that goes to devilish places you wouldn’t expect from the outset. As a horror movie, this works really well and has some great, tense sequences in it. As a procedural, it’s fun and funny in the way we like our cop dramas to be. But the real hook of this film is the female protagonist in a world of downright shitty men. Our lead detective is convinced she knows the identity of a serial killer they’re investigating, but as her coworkers continually dismiss her, she becomes more obsessed with her suspect, eventually starting to lose touch with and question her reality. Have I mentioned gaslighting in this post yet? This is the best looking movie at the fest so far, plays as both comedy and horror without sacrificing either, and takes the gender issues at the heart of it very seriously. And it played so well with the crowd – the whole theater was laughing at the right moments and you could hear gasps as people tensed up during some of the sequences. I really, really liked this movie and hope more people are able to see it in the future. Prior to the film we were treated to another short called Signal to Noise, directed by Jarret Blinkhorn. This one is a little hard to say anything about without spoiling, so I’ll just say that it’s shot extremely well, has a great “Chekhov’s Chainsaw” fake-out, and expresses an interesting American anxiety about government and control. I like this one quite a bit. 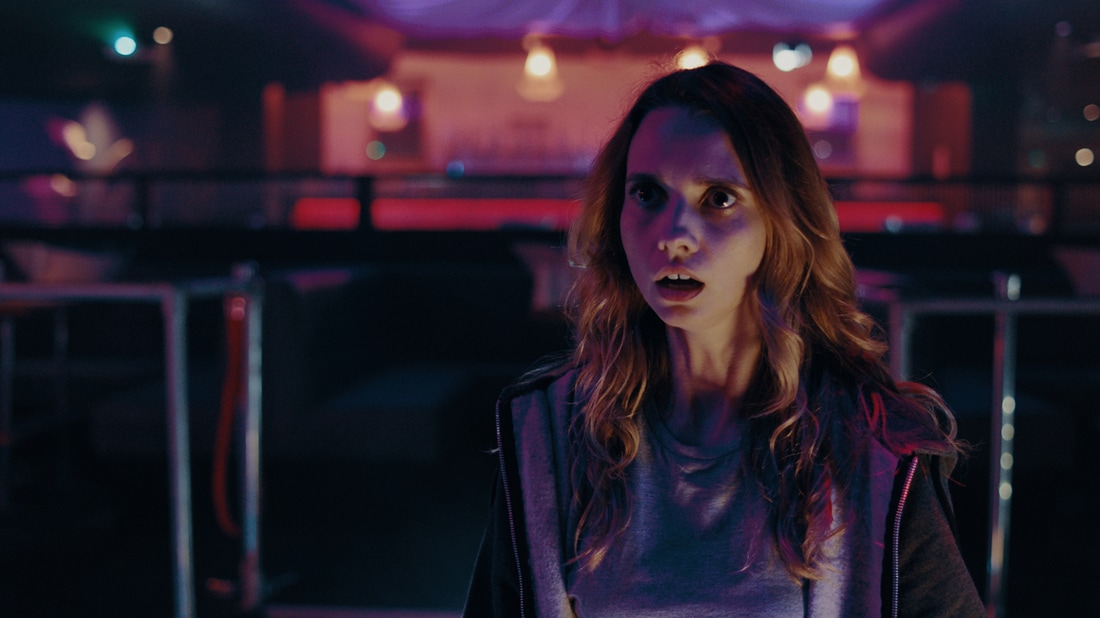 Before the final film of the night, we were treated to one more short film, this time a Spanish horror movie called Void Chair, directed by Xavier Miralles, which essentially serves as an excellent jump-scare calling card. It looks great and is very effective at setting up tension and releasing it. That brings us to the day’s last film, which took all the thematics at play from the day and put them in a blender to pretty decent effect – that film is Ruin Me, directed by Preston DeFrancis, who was in attendance with some of his cast and crew as this was ultimately their US premiere. Set at a haunted attraction much like the one featured in Spookers, the film is about a young woman that accompanies her boyfriend to “Slasher Sleepout” which is like an escape room meets haunted house, meant to put you in the center of a campy 80s horror film and scare the shit out of you. When it becomes apparent that this isn’t the game they signed up for, she either has to play along or face the same fate as her cohorts. This movie goes to some really interesting and dramatic places I didn’t expect it to and explores the idea of a manipulated woman that starts to lose touch with reality, much like Charismata and some of the day’s shorts. You might say the them of the day is “listen to women”, which should really just be the theme of this decade, and the rest of all time. While I appreciated these thematics, Ruin Me does become pretty difficult to watch as it goes on, because the protagonist is just treated so, so badly by literally everyone she comes in contact with. While the film is clearly on her side, it still abuses her in a way that is difficult to get through. I liked this movie overall, especially after getting to sleep on it and think about it more, but it didn’t quite connect with me like some of the other features this weekend.

PUFF continues today with three more features and a block of local short films, so make sure you come out to The Drake and support the best movie event in the city while you still can. It’ll be a whole year before we all get to be weird together again, so let’s fucking do this.