Fantasia is best known as a showcase for feature length genre fare, but it would be a serious mistake to discount or dismiss the collection of incredible short films they showcase yearly. You can find some of the most original and ambitious work of the whole festival on display here, with an international array of filmmakers displaying some serious short-form talent.

This year’s Born of Woman showcase displays the extraordinary breadth of this talent, celebrating the “unconventional gaze” with a collection of female-helmed shorts featuring a vast variety of subject matter and genre. It’s a timely collection, sometimes funny, often devastating, but always gripping.

Here are the nine films featured this year: 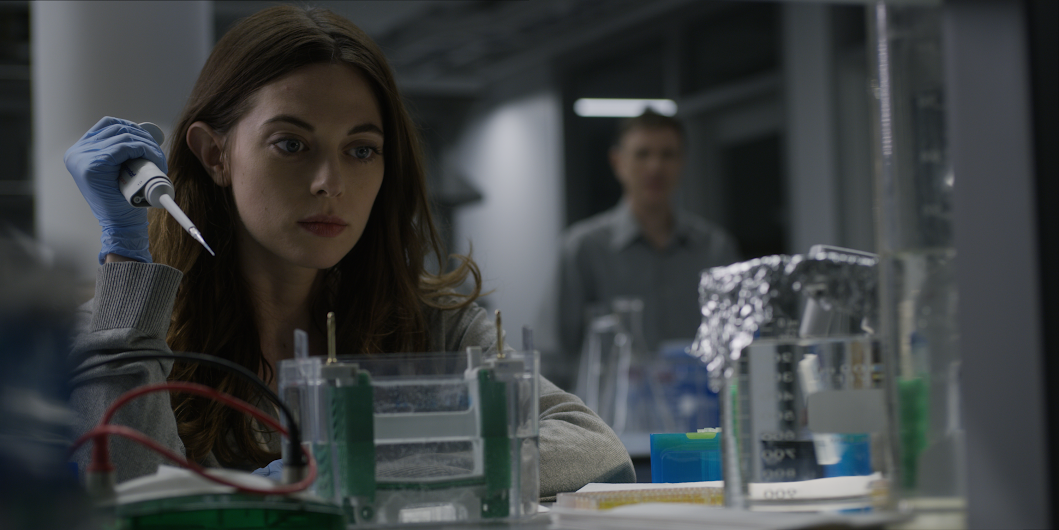 The horror in Ida Jogler’s devastating The Gaze doesn’t come from deranged killers or snarling monsters, but from a constant, real-life threat faced by women every day in the form of abuse and harassment from men in positions of power. While the #TimesUp and #MeToo social media campaigns have brought the issue of rampant exploitation in the entertainment industry to light, the same issues exist in all occupations with reinforced one-sided power dynamics.

This beautifully shot 14-minute short focuses on the science industry, with a young researcher (a wonderful Siri Miller) being pressured to have some late night green tea by her boss, who also happens to be an intimidating Nobel prize candidate. She wakes up the next day feeling dazed and hungover, but suspects what we all suspect, that she was drugged and assaulted. Attempts to discuss it with a friend results in doubt and suspicion, and even the pair attending a party leads to another uncomfortable incident where a drunken male friend sloppily hits on her. Later, she’s invited into her bosses office once again, but this time with a much different result.

There’s a supernatural element always lingering in the background, but while The Gaze ends with some much desired payback, it’s also a cold – and intentional – reminder that many similar crimes remain unpunished. 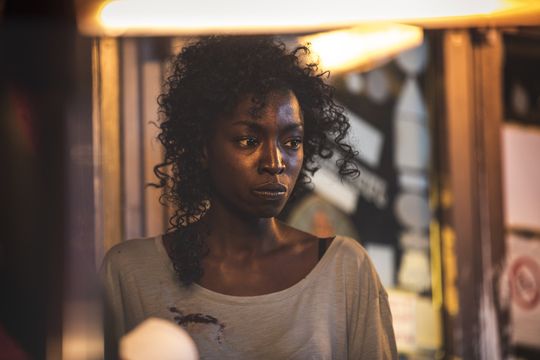 The comic highlight of Petite Avarie is its opening sequence where Laura (Manda Touré) reveals to her boyfriend Sylvain (Léo Hardt) that she has breast cancer. Yes, I said comic highlight, as Sylvain’s callous attempts to end the relationship while delivering a horrifyingly plausible collection of excuses, is both jaw-dropping and unbelievably funny.

But things are just getting started, and the action moves to a local bar where Laura confronts a startled Sylvain, getting the upper hand after an aborted attempt to cut off her breast. What follows is a torrent of righteous (and deserved) anger, punctuated by acts of sublimely silly violence in front of a crowd of gawking onlookers.

This is very, very dark material, but it’s also beautifully paced and acted, particularly by Hardt, who also wrote and co-directed. It starts to lose steam right at the end, but the credits stinger makes up for it. A very funny short that gleefully embraces moments of sublime bad taste.

This nasty bit of body horror from writer/director Chelsea Lupkin tells a familiar tale of a bullied teenager who discovers some unique abilities (and some surprising physical transformation) while trying to navigate through the perilous minefield of high school.

If you’re thinking Carrie, so was the filmmaker, as the titular Lucy even watches that film in a particularly on-the-nose moment. Unfortunately, truncating the action into 17 short minutes means that aside from Lucy herself, the supporting characters – the bullies, Lucy’s mom, and even potential beau Brad – get short-changed and come off more cartoony than most likely intended.

But even with the mediocre characterization, the final sequence: where all Lucy’s hopes and fears come to a head, is intense and powerful. Features some minor, but impressive, special effects, and a great, haunted turn from Irina Bravo as Lucy.

A young girl is plagued by dreams of her father. While at first her mother appears comforting, it soon becomes clear that something has gone very wrong in this household. The air hangs so thick you can almost taste it, and nearby sits some rotten fruit. There’s frantic pounding on door from the girls’ uncle, but mother says it’s just that he’s desperate for some of the insurance money the family has received after her father’s recent injury.

Yeah, something is off about mom, and things rapidly come to a head once the girl discovers her father tied to a bed, a ventilator strapped to his face, begging her to call his brother and let him in. By the time the mother forces his eyeballs open and grabs a few sharp implements, most audience members will be cringing. I know I was.

A terrifically creepy and disturbing short from South Korean director Jiwon Moon, featuring some wonderfully claustrophobic set design and appropriately stifling cinematography. A threat of violence hangs over the entire ordeal, and it perfectly captures the unsettling feeling of being trapped with someone completely – and terrifyingly – unpredictable.

One of the 55 greetings sent out with the Voyager mission in 1977:

Friends of space, how are you all? Have you eaten yet? Come visit us if you have the time!

So begins this wonderfully bizarre short that takes place on the remote arctic island of Svalbard. Two security guards discover a long-haired, bearded man raiding the Global Seed Vault, and any attempt to communicate with him falls on seemingly deaf ears. The pair suspect that he’s someone who lived nearby who simply went insane from the isolation, but when a surprisingly similar looking man appears on the security camera, it’s clear there’s something strange going on. And it’s about to get stranger.

The locations and sets here are immense, and absolutely gorgeous, and in a very brief 8 minutes, Norwegian director Kjersti Helen Rasmussen captures an appropriately otherworldly tone that culminates in a sublimely eerie final image. There’s one central special effect that might elicit a few chuckles, but this is a fine, suspenseful short with some dynamite production values. 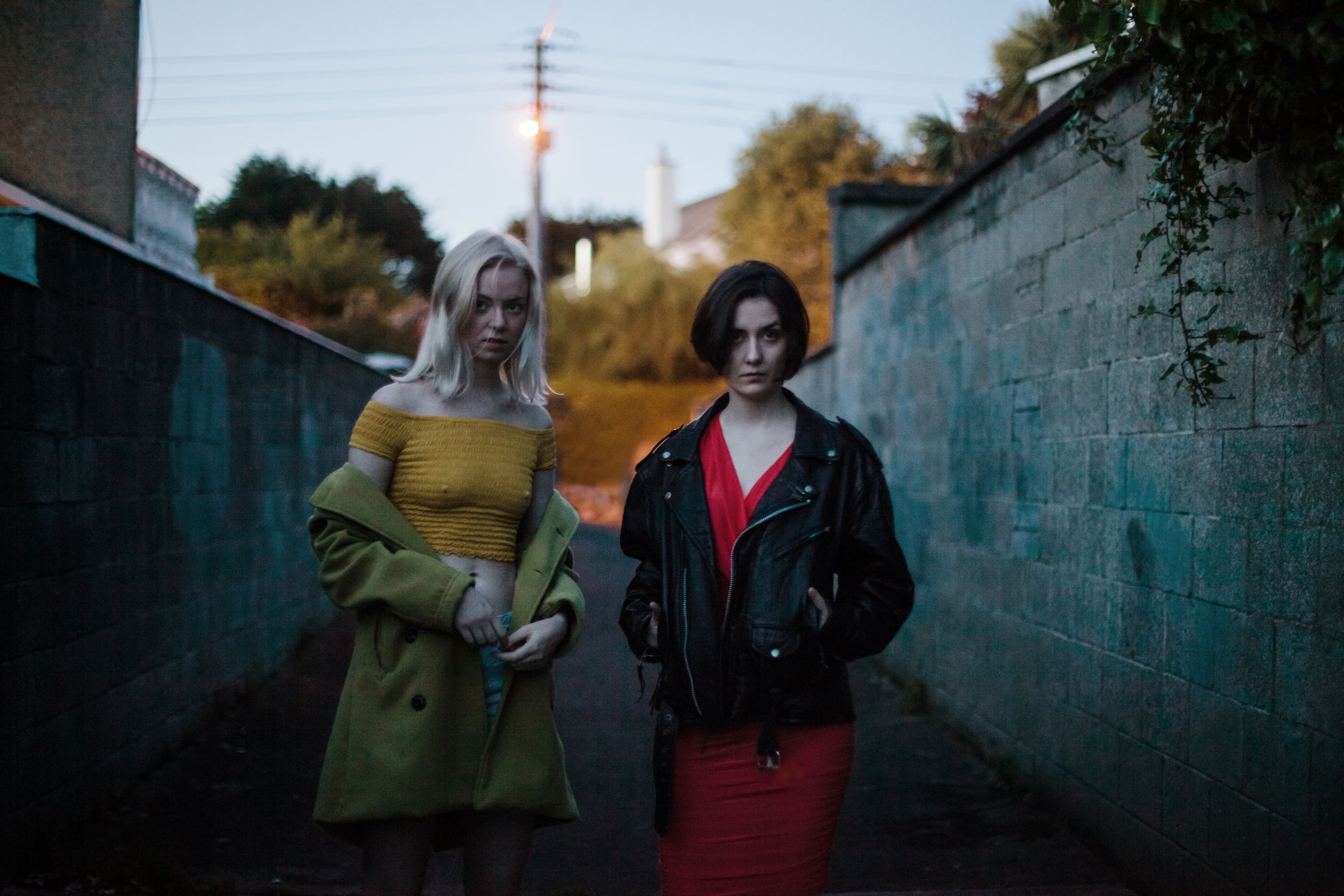 Men get away with a lot. Too much. But wouldn’t it be nice to see it all go wrong just once? To see a guy being abusive or toxic to the wrong woman (or women), and see him punished for those indiscretions?

It certainly makes for satisfying viewing in Kate Dolan’s brief Catcalls, where a creep exposes himself to a couple of young women on the side of the street before rushing off home to his wife (after a quick jerk session in the car). But after a frantic visitor arrives on his doorstep, he soon finds himself pursued by a monstrous female cat. The final few minutes take the form of an extended chase scene with a predictable, though gratifying, ending.

If you’re a horror fan, you’ve seen the nuts and bolts of Catcalls many times before, but the gender reversal and shape shifting antagonist – along with the intense political climate of 2018 – gives it a all a bit more resonance. Very slick, and a potent reminder that sometimes pussy grabs back. 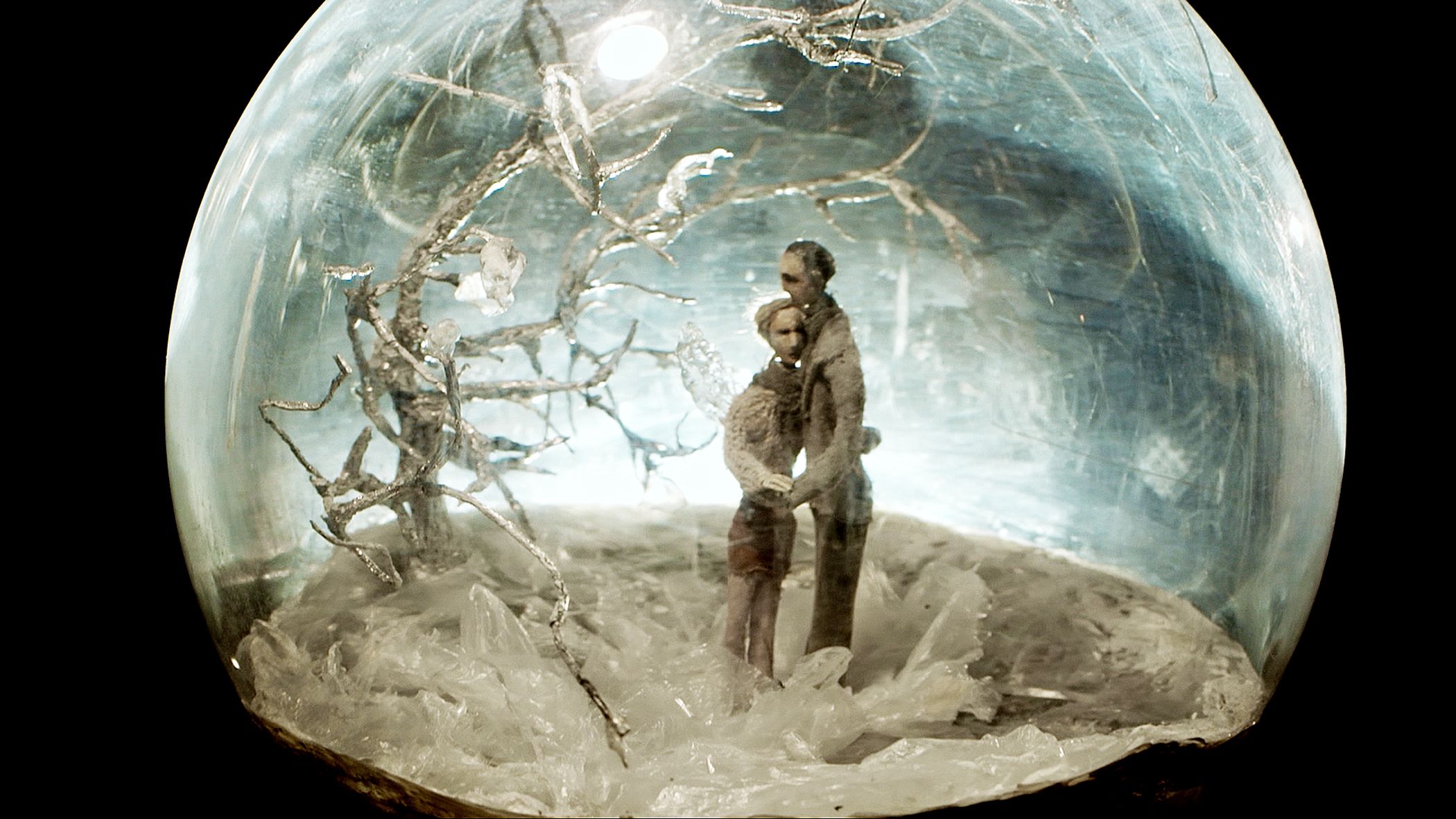 Haunting, beautiful and utterly disturbing, Puppet Master uses surreal imagery and some incredible (and unnerving) puppeteering to bring to life a relationship between the titular puppet master, and the lonely woman he’s captured and turned into a puppet.

Director Hanna Bergholm has stated she wanted to make a film about objectifying and clinging relationships, and the way in which quiet desperation can lead to people remaining in poisonous relationships is brought to devastating life here. The woman initially finds elation in being controlled, but when the puppet master becomes distracted with another project, the power shifts and her bliss turns to sorrow and distress.

There is some unforgettable imagery here, with an incredibly range of emotion on display via the puppet design and manipulation, despite the complete lack of dialogue. Something special. 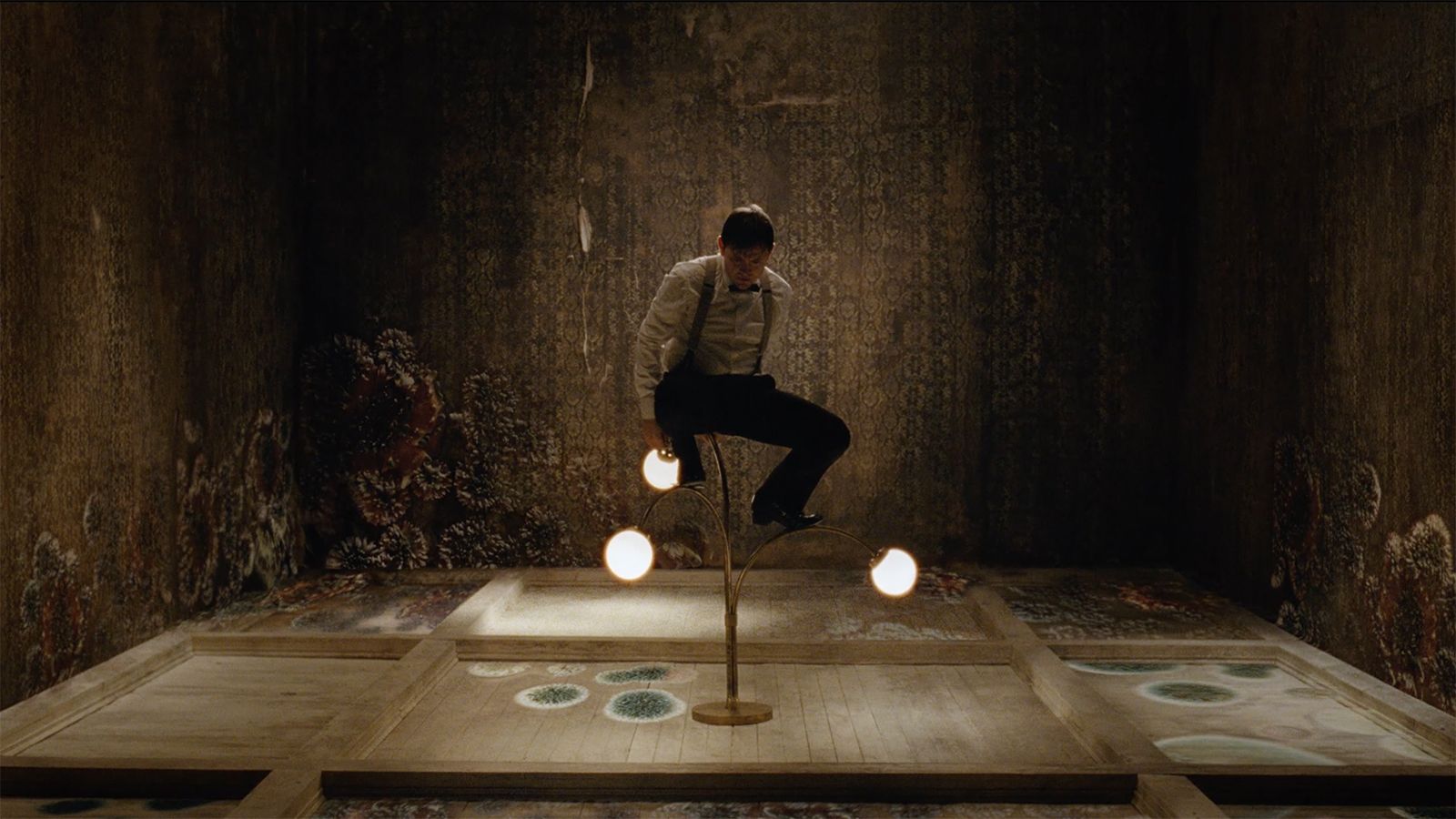 After a woman drunkenly collapses in front of his band, a trombone player is reluctantly tasked with bringing her home, which involves a exhausting trek up a never-ending spiral staircase. Once he arrives and sets her down, attempts to reward himself with a bottle of wine lead to things going immediately sideways. And upside down. Surreal slapstick hijinks ensue, including having to tangle with a rickety bookcase full of experts on mycology (the study of fungi).

It’s hard to know quite what to make of Marie Dvorakova’s wonderfully surprising Who’s Who in Mycology, but that’s its biggest strength. Co-written by National Lampoon (and This Is Spinal Tap) legend Tony Hendra, the proceedings start innocently enough, but soon they explode into a flurry of destruction, mold and repressed sexuality. It’s all filmed with a playfulness reminiscent of early Jean-Pierre Jeunet, with the apartment at its center both a ramshackle prison and a playground of comic set pieces. Great fun. 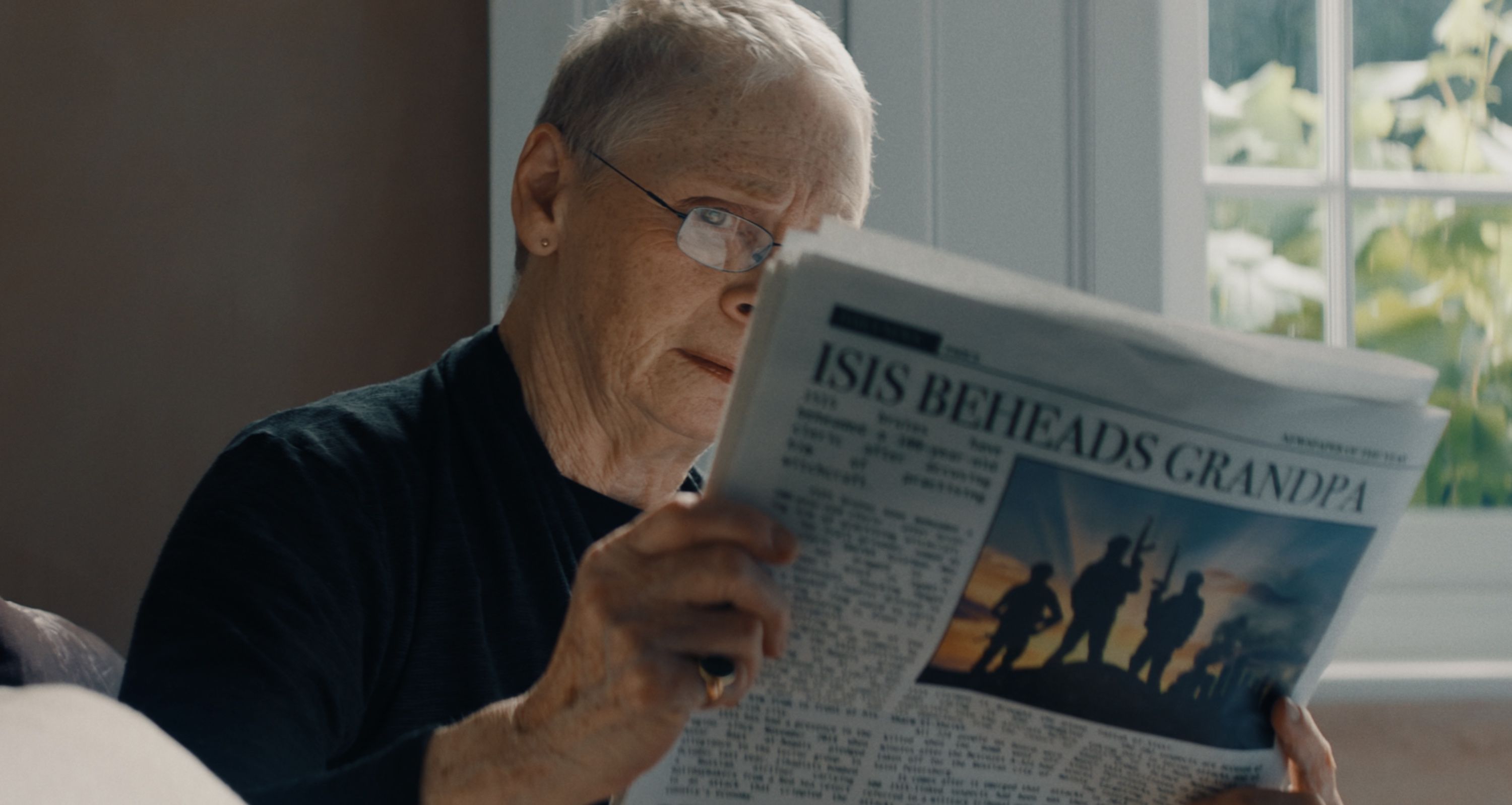 The Old Woman Who Hid Her Fear Under the Stairs
Dir. Faye Jackson

It’s a terrifying world to live in, and even more so if you’re older, isolated and vulnerable. Faye Jackson certainly understands that creeping fear, and her The Old Woman Who Hid Her Fear Under the Stairs plays as a character study of a woman (Sara Kestelman from Zardoz!) terrified to leave her home due to the seemingly never-ending barrage of bad news she’s faced with in newspapers, on TV and even outside her front door where an ominous figure appears to regularly lurk.

Desperate, the old woman turns to an online Self Help Guru who helps her manifest her fear into an (unseen) physical form, which she traps in a biscuit tin and hides away. At first this gives her stark relief, but when that figure starts rattling her doorknob late at night, her fear tries to make itself known once again.

It makes for stirring viewing thanks to some wonderfully moody and tense photography, as well as Kestelman’s brave performance. The final few minutes, featuring an older white woman feeling threatened by a faceless, hoodie-wearing character could be interpreted as both an embodiment of unnecessary fear, or – more troublingly – a confirmation of that same fear, but the focus is smartly kept on her attempts to wrangle and control her everpresent anxiety. Effectively creepy, and with a great use of the Golden Gate Quartet’s version of “God’s Gonna Cut You Down”.