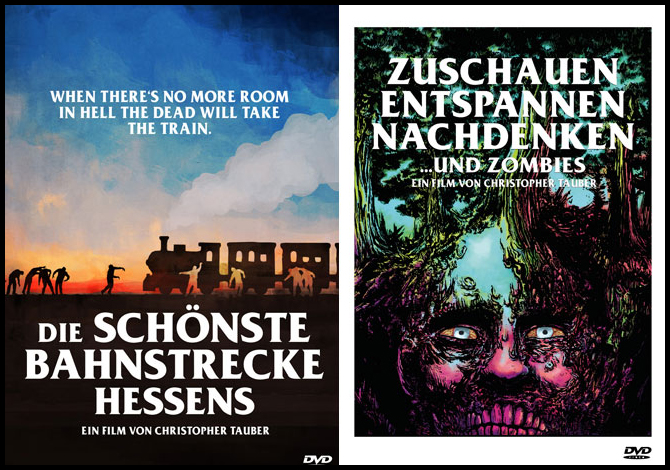 Christopher Tauber‘s two zombie themed short films, Die schönste Bahnstrecke Hessens (The Most Beautiful Railway) and Zuschauen, Entspannen, Nachdenken und Zombies (Watch, Relax, Ponder, and Zombies), are available now on DVD together. I was lucky enough to land a copy of these two brilliantly designed short films from the German auteur and would be remiss if I didn’t take the time to share a little bit about the release with you all, notably with a focus on 2018 Philadelphia Underground Film Festival selection Die schönste Bahnstrecke Hessens (The Most Beautiful Railway). Railway‘s entire design is unique and incredible, blending the concept of “slow TV” and standard genre fare.

Tauber writes on his page about the film:

For many years, nostalgic or insomniac Germans would spend their nights engrossed in a popular TV feature consisting entirely of the view from a railway locomotive traveling along one of ‘The Most Beautiful Railway Lines in Germany’. This film is a homage to that genre and to George Romero’s zombie pictures, offering intense relaxation tempered by an ever-growing sense of dread and culminating in a horrific finale.

If you aren’t familiar with the concept of “slow TV”, the most popular American equivalent of this European television genre is Bob Ross. While obstensibly a painting show, most people legitimately watched Ross’s show as a way to simply relax. The classic “yule log” broadcasts, meant as seasonal background noise and visuals, are other great examples of this type of television. In countries like Germany and Norway, rides along the railroad were very popular forms of this type of TV.

In this film, Tauber displays incredible cinematography while paying homage to his love of genre film. The unique film is bolstered with a second version of the film, mimicking another popular form of German television, as well as a stellar English language commentary from the hosts of the I Like to Movie Movie podcast, friend of The Farsighted Dan Scully and our own contributing writer Garrett Smith. Watching the film with their commentary was a delightful experience and is a highly recommended experience for everyone who is able to.

The film is packaged with a perfect companion in Zuschauen, Entspannen, Nachdenken und Zombies (Watch, Relax, Ponder, and Zombies), which inserts the living dead into another format typically not associated with the genre. While Railway is the star on this release, the two work well together to create a great DVD package. If you’re looking for a unique horror experience, this is one hell of a way to spend a Sunday afternoon.