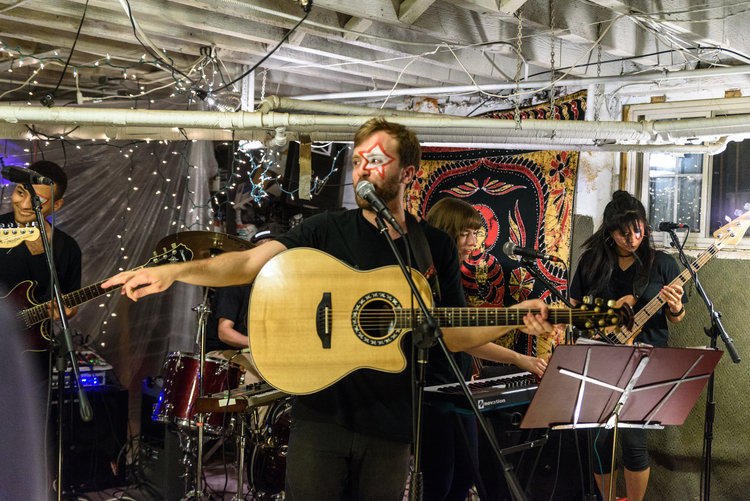 Sure I was born in NJ, but my Philly pride runs deep. Having been down here for 20 years now, the Philadelphia area is my home. I say “jawn” more than should be allowed, have adopted Hall & Oates as musical patron saints, and address all the staff members at my local Wawa like we’re friends because of how often I see them. Thus, it shouldn’t be a surprise to anyone that I take real pride and particular enjoyment in discovering new artists from Philadelphia that impress me. David Thompson is the latest such example.

Being a bit less plugged in that I was BK (“before kids”), I sadly missed out on Thompson’s previous band, Big Tusk, so I knew little to nothing about him before checking out the wall, his latest EP. As a solo artist, the music is all his vision and all instruments are played by David, himself – outside of the lead guitar tracks on “the wall” and “clair”, which are played by Howe Pearson. The resulting five tracks blend New Wave style synths, R&B, pop, and the type of weirdness that defined acts like the Talking Heads with a definite indie rock vibe to create a unique release that’s sure to turn a few heads. Honest and legitimate comparisons could be drawn to everything from Human League to Sufjan Stevens to 90s dance pop. The influences are too diverse to lock down – especially when Thompson himself lists Bruce Springsteen, Kafka, and “sinister commercial energy of 90s VH1 and MTV programming” as major influences – but the final product is a truly singular sound that could fit in to many a rotation or playlist.

While all 5 tracks a supremely listenable, the standout tracks for me are “claire” and “obsession”. Something about the melodic tunes of these two tracks really works for me. Though, the eccentric and unconventional sound of “time” really hooks me, as well. And, to be fair, the remaining tracks are equally unskippable, so calling anything a standout track may be a bit overstated. All five tracks are can’t miss places to start if you’re looking for a single track to start with.