John Waters, eternal outlaw of cinema, has always treated filth with the respect it deserves. His filmography is instantly recognizable by its embrace of schlock, camp and bad taste; gleefully thumbing his nose at the hypocrisy and cowardice that lie behind the mask of “polite” society. But by 1994, Hollywood had come around to John Waters. After Hairspray and Cry Baby, he had achieved something akin to a moderate mainstream respectability. He was still making his movies in Baltimore as he had always done, but Hollywood was fitting the bill. It wasn’t that Waters went to Hollywood; Hollywood came to Waters. One of the changes this brought was the appearance of Hollywood stars in his movies 1981’s Polyester had former teen idol Tab Hunter, and Cry Baby (1990) saw him working with the then up-and-coming Johnny Depp. But with ‘94’s Serial Mom, he made his first film with a bona fide, current Hollywood movie star, Kathleen Turner.

Turner plays Beverly Sutphin, the titular mom. She is a classic John Waters heroine; the depraved lunatic; a perversion of the traditional feminine ideal who thru the ironic lens of camp and schlock, holds a funhouse mirror up to the rotting heart of the American Dream. Beverly is a devoted wife and mother, ceaselessly toiling to keep her beigey suburban home a haven of domestic bill, caring for her husband and two almost-full-grown children. But she is also a burgeoning psychopath, with a collection of serial killer memorabilia stashed under her mattress. She ruthlessly takes revenge on even the most minor of sleights, tormenting her neighbor (lifelong Waters collaborator Mink Stole) with obscene phone calls for stealing a parking space months prior, bludgeoning a woman to death with a ham for not recycling, and running over her son’s teacher for criticizing her son’s gruesome sketch in art class. 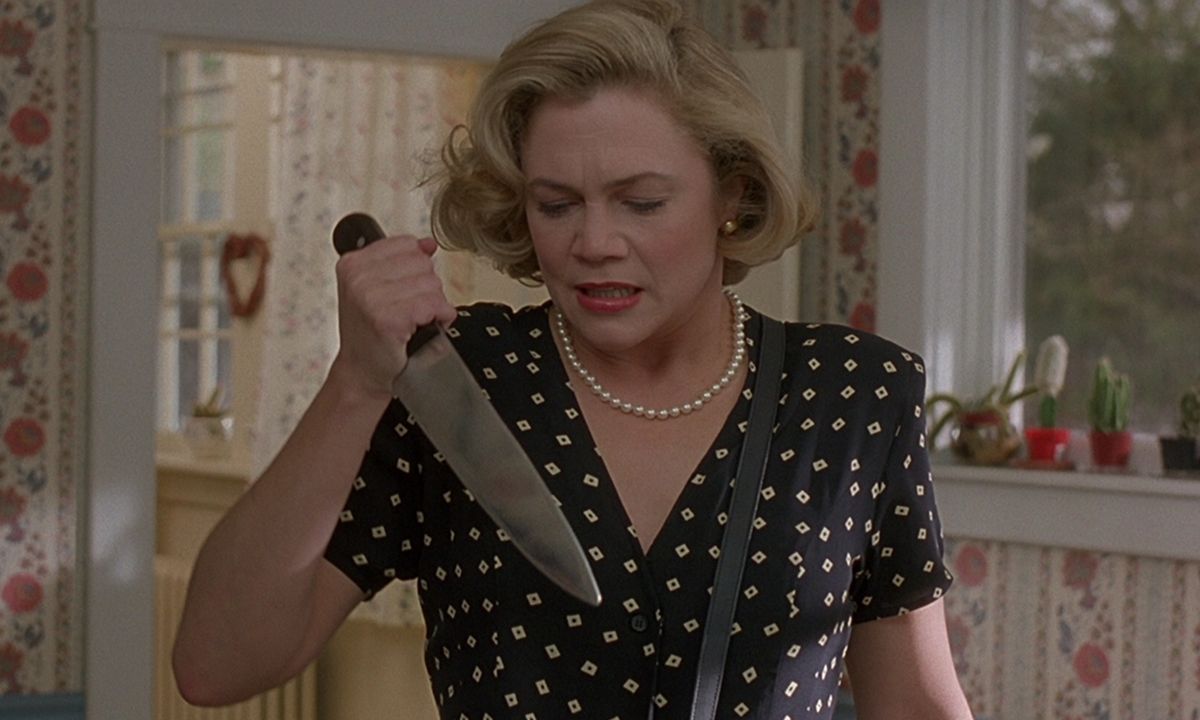 The Hollywood budget but that doesn’t stop Waters from celebrating filth either. With a subversive wink, he uses the occasion to pay overt, loving tribute to one of his idols, the Godfather of Gore, Herschell Gordon Lewis. You can clearly see the schlock auteur influence in Waters’ work, from the gleeful disregard for the good taste of the so-called polite society, to the lets-get-the-gang-together-and-make-a-movie DIY spirit of his early films like Pink Flamingos and Multiple Maniacs. Beverly’s son Chip, who works part time at a video store watches Lewis’ film Blood Feast throughout the film, and even has a weird bonding moment with his mom when she asks to rewind the tape to rewatch the film’s famous scene where the killer rips the tongue out of a woman’s mouth. Waters goes on to directly quote that scene as well; Beverly gingerly removes the dangling piece of liver off of a poker she has just used to impale a victim, using the same prudish care with which we previously saw her pick a porno mag off her son’s bed. That’s the kind of movie Serial Mom is. It’s a ludicrous premise; a perfect suburban wife and mother goes on a killing spree in her neighborhood, and ultimately ends up a media sensation, and cause célèbre. But ludicrous premises make for great surreal horror comedies, and Serial Mom is a blast.