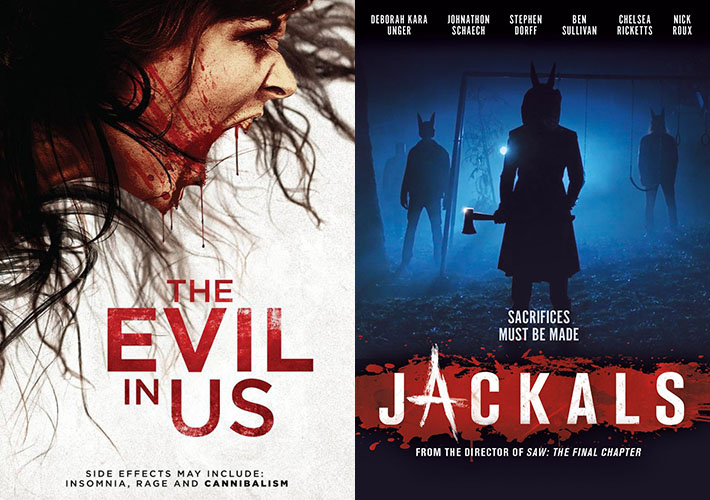 Two new releases that have hit shelves in the past few weeks are, at their core, all about how the greatest enemy of man is man himself. The most powerful demons reside within the very souls of men. In the case of The Evil in Us and Jackals, these inner demons lead men to go to extensive lengths and create mammoth bodycounts in order to accomplish the goals they set out for themselves. While the two films have different tones and different themes, both are concerned with showing us the awful things humans are capable of doing to each other.

Writer/Director Jason William Lee’s feature film debut takes a familiar concept and puts a few twists on it, making it something fresh and exciting. The idea of a drug that incites rage isn’t something new. This drug takes hold quickly and turns its victims into blood thirsty, flesh craving, zombie-like cannibals. They cannot control their urges to maim, kill, and feast on flesh.

Without the unique twists, the film still holds up on its effects, action, and overall direction. The fights and attacks are well done, both technically and aesthetically. Nothing about these sequences is necessarily earth shattering, but nothing is done poorly or in a distracting manner either. The action and effects are enough to keep one reeled in; however, that’s not all we’ve got here.

Of the two unique twists to the story that stand out as most interesting, only one can be revealed here; that fact is that the drug causing this rage virus is manufactured to adhere itself to a cocaine strain that is distributed on the streets. This, of course, leads both addicts and recreational users to become cannibal psychos with no conscience or control. The choice of cocaine seems a very deliberate one, making the upper crust and elite as prone – or even more prone – to turning into the rage monsters.

The final twist shows itself in the final minutes and has something to do with the actual production of this drug. It’s potent, satirical, and powerful. This final revelation moves this film from a good one to something one can legitimately chew on. Released recently by RLJ Entertainment, the film released on a much more limited run last year, but is now widely available on DVD and most major VOD outlets.

Director of Saw VI and 3D, Kevin Greutert, returns with Jackals, also new to home video. Jackals just released on DVD, Blu-ray, and all major VOD platforms via Scream Factory this past week. Prior to that it was available via rental on several platforms during a limited theatrical run. It features Stephen Dorff, Deborah Kara Unger, and several other faces most horror fans will recognize (or in the case of the cultists, voices they will recognize, as masks hide their faces).

The film’s plot focuses on a family kidnapping their son from a cult in order to bring him away to their cabin in the woods and deprogram him. Of course, the family has no idea just what lengths the cult members will go to to get their prodigal son back. It’s the son’s blood family vs. his cult brothers and sisters, in a battle to the bitter end. It’s about the desperation of man, the lengths people will go to for their cause – in this case, their family.

While the carnage in the previous film comes from uncontrolled rage, created in a lab by the evil of man, the carnage here comes directly from the hands of man himself. We see the son’s family go to extreme lengths and his cult family go even further. It’s a decidedly different type of film, the first having the tone of a zombie film, while this one is more a siege film. Yet, both remind us that real evil isn’t always some grandiose supernatural force; real demons often come from within.