If the eyes are the windows to the soul, then certainly the tongue is a window to the… mouth? Something like that.

Anyway, injuring your tongue is the worst, because you’re always using it. Burn it on a piping hot slice of pizza and you’re in for a bad day. Filmmakers have taken advantage of our conscious need to keep our tongue out of harm’s way by putting it through all sorts of unpleasant filmic tortures. Here’s five of the nastiest.

Looking back, it’s a little hard to believe we all got so up in arms about Fede Alvarez’s remake of Sam Raimi’s seminal batshit horror film Evil Dead. It’s not a great movie, but it’s pretty good, and damn violent, but most fans of the franchise had trouble dealing with an Evil Dead film that didn’t a) star Bruce Campbell (who makes a completely nonsensical cameo at the end here) and b) wasn’t directed by Sam Raimi. Also, there were some people who just couldn’t accept a woman being the hero because horror fans are the worst.

Well, now we’ve gotten two seasons (and counting!) of an actual continuation of the Evil Dead franchise in TV form – which is still a weird thing to write – I think we can all cool our jets on hating on the 2013 Evil Dead.

One of the ickiest scenes in the movie involves Jane Levy’s Mia licking an exacto knife and splitting her tongue in half before delivering a boner-killing girl-on-girl kiss. Those wacky deadites!

I remember the first time I got my greedy little hands on a VHS copy of The Story of Ricky. It was a film talked about in hushed tones in cult film circles, an ultra-violent Hong Kong adaptation of the Japanese manga Riki-oh that was packed with extreme, hilarious violence (and some of the worst dubbing known to man).

Bodies are broken, pummeled, and flayed. Heads are crushed and eviscerated. It’s quite a spectacle, and I wish we got thirty sequels.

At one point, our hero befriends a poor mute boy (who also happens to be the godson of one of the “Gang of Four” who rule the futuristic prison) and they bond over.. something dumb. Riki tries to strike up a conversation, but the kid can’t respond because someone has cut his damn tongue out. Revealed explicitly in this none-too-convincing close-up. 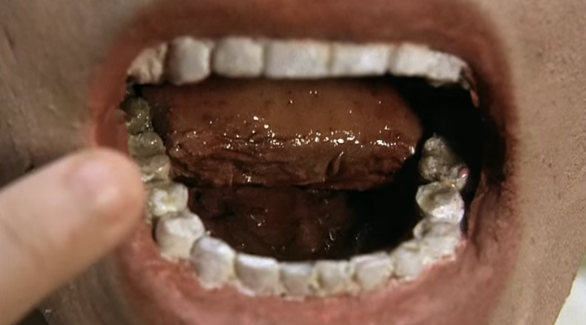 Look, if you haven’t yet seen Oldboy, I’m not going to spoil it for you. Go watch it, and then come back and read the rest of this. I can wait.

All done? Pretty great, right? Anyway, as you now know, in the final act it’s discovered that Oh Dae-su has been unknowingly having sex with his own daughter, which is to be revealed to her by the vengeful Lee Woo-jin. Consumed by guilt and fear, Dae-su first begs on his hands and knees that Woo-jin not reveal his terrible secret.

When that doesn’t work? Dae-su grabs a pair of scissors and cuts off his own tongue. Damn, dude.

What’s incredible about that Oldboy scene is how visceral it is. There’s little actually shown on-screen, but a combination of editing, sound effects, and performance give us the impression that we’ve seen the scissors slicing right through the tongue.

But, hell, sometimes you’re not in the mood to be tricked by the magic of cinema. Sometimes you want to see a guy take a samurai sword and slowly and painfully slice through his mouth-meat, before offering it up to some grossed-out yakuza.

That’s what happens in Takashi Miike’s amazing Ichi The Killer, which features the always awesome Tadanobu Asano giving one of his most unhinged performances. After discovering that the guy he’s been torturing is innocent, the ruthless (and sadomasochistic) Yakuza enforcer Kakihara (Asano) gives penance by slicing and dicing his tongue before nonchalantly moving on with his day. Weird, sick, and totally bad-ass.

The grandaddy of ‘em all! There are numerous memorable moments of violence in H.G. Lewis and David F. Friedman’s gore originator, but few are as tasteless (see what I did there?) as when the demented Fuad Ramses (Mal Arnold) bursts into a hotel room and brutally rips out the tongue of one of his many nubile victims (played by Astrid Olsen).

While the sequence goes on endlessly, and the tongue (a none-too-fresh sheep’s tongue) looks absolutely ridiculous, it’s also starkly representative of the take-no-prisoners, anything goes attitude that made the film so shocking for its – and any – era.

It might not get the same press as the eye slicing from Un Chien Andalou, but in its own way it was equally revolutionary.