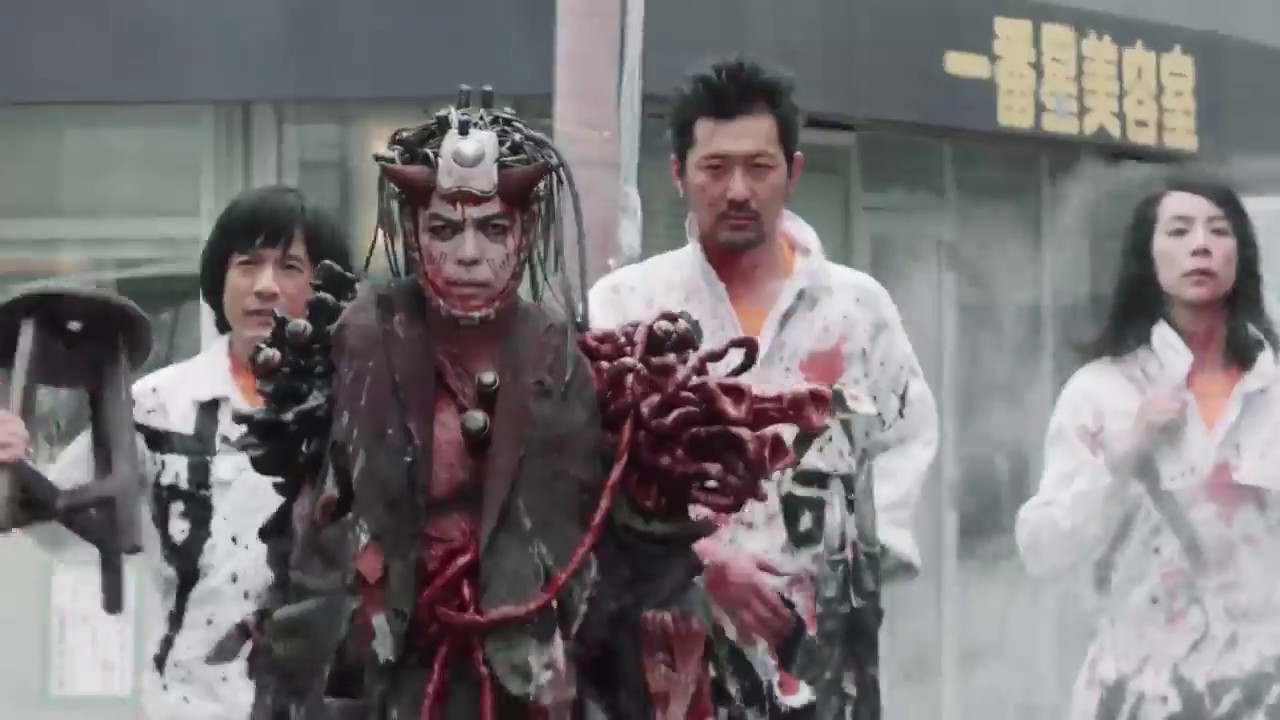 If you have ever seen a movie from Japanese filmmaker Yoshihiro Nishimura, then you know what to expect. Films like Tokyo Gore Police and Helldriver are over-the-top gore films that have little, to no concern about plot. This film is no exception and follows his “throw everything at the screen and see what sticks” attitude that we have come to expect.

Kodoku Meatball Machine is a very loose sequel to the 2005 film, but seems to have very little in common with the original movie. It may ring truer than I remember, but its been 10 years since I saw (the original) Meatball Machine. Truth is, who cares? I am not a big stickler for continuity, but I do remember 2005’s to have something of a cohesive story. That’s a lot more than what I can say about this entry.

The film opens with a 20 minute introduction to all of the film’s main characters. This includes a spineless bill collector who is dying of cancer, A quiet woman who works at a bookstore and a gang of sword wielding policemen. We also see a mysterious woman wandering the streets, observing and marking lines through the city. Once the lines are complete, a giant glass dome/jar comes from space. It eventually captures our protagonists and then starts turning the residents into mindless killing machines. The bill collector fights off the alien infestation and sets off to save the girl from the bookstore.

I wish that this film would have been made in the early 00s. At that point, Japan was still funding these types of movies and it could have had the budget it needed. Most scenes look cheap and the CGI is (altogether) distracting. I have a beef with digital blood and Kodoku Meatball Machine is full of poorly rendered CGI blood. They do try their best to incorporate practical effects, but these set pieces just don’t work.

The mayhem (on the other hand) is fantastic. There is something to be said about a film that basks in its sleazy nature. Most scenes are excuses for gore or bare breasts, which is entertaining. Like other films in this micro budget world, it goes on far too long. Its runtime is well over 100 minutes and could have been more fun at 70 minutes. Even with these complaints, there was still a lot to enjoy and if you are a fan of these types of movies then you will probably dig Kodoku Meatball Machine.