When he wears her tits… just wow.

That’s the text I received when I woke up this morning. I don’t get texts like this very often. A text like this at 7:00am could only mean one thing – PUFF 2 has begun.

2016’s inagural Philadelphia Unnamed Film Festival (known as PUFF) was my favorite movie event last year. It was situated above a Mexican restaurant with a make-shift screen and carnival popcorn cart on hand – it was as Philly-DIY as you get and I loved it. They screened a shit load of short films that ranged from unflinchingly disgusting and bizarre to completely zany and hilarious, and I got to see six or seven features that I never would’ve had the opportunity to see otherwise. We Go On was a contemplative ghost story that I absolutely loved and Karate Kill was an over-the-top exploitation-martial arts film that would’ve been the most fun movie of 2016 had Gods of Egypt not also come out that year. My point is, PUFF is like a lavish, fantasy weekend getaway for genre hounds that like to sit around talking about the most fucked up gore effects they’ve ever seen.

And opening night of PUFF 2 has already upped the ante and proved that this is going to be twice the festival it was last year. Now at the Drake Procenium Theater in Center City, Philadelphia with a screen nearly twice the size of last years, festival founder Madeleine Koestner (who we interviewed on I Like To Movie Movie last week) and her team have outdone themselves. The first exciting thing I noticed is that PUFF is no longer Philly’s best kept secret – the house was packed all night with a great, excitable crowd that were a joy to watch some movies with. I saw a lot of attendees I recognized from last year, and about twice as many that I didn’t. They had some local vendors at the front of house selling artwork and t-shirts, and they provided free beer and wine between screenings, though I suspect that was to help lube us up for the final feature of the night. The whole night felt more organized and streamlined than last year. I was just so impressed with the work they put in to making this scrappy festival feel legit, without losing that DIY touch that is so appealing.

They really knocked it out of the park with their opening night line-up too. The night began with a short film called Rain directed by Martin Gerigk that I absolutely loved. It’s a little hard to describe, as it’s a series of sound effects and close-ups on various objects, most of them wet in some way, that amount to a sort of symphonic caricature of rain. That probably didn’t make a lot of sense, but this experimental short is well worth seeing, and so perfectly constructed that I could’ve watched it for three hours and never gotten bored. Rain was perfectly paired with PUFF’s first feature, Imitation Girl, directed by Natasha Kermani and starring Lauren Ashley Carter. It’s a character study that has shades of Under the Skin and Close Encounters of the Third Kind, but very much feels like its own slice of indie sci-fi. There’s a Stranger in a Strange Land vibe to a lot of it that I thought was a really interesting way to explore immigrant experiences in America and also folds into some gender identity questions nicely. Natasha Kermani was on hand for a Q&A after the film where she talked a bit about choosing to make half the film in Farsi and trying to make the movie feel both personal and alien at the same time. A few members of the cast were with her, notably Neimah Djourabchi who gives a monologue about bread in the film that is absolutely outstanding and was kind enough to chat with me a bit after the screening. He revealed he’s mostly done stunt work prior to this, which is how I discovered I was standing in alley way chatting with someone that worked on films like The Wolf of Wall Street and Okja. These are the kinds of connections and great stories that PUFF makes me thankful for. 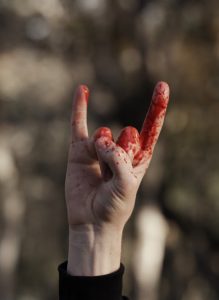 The second block of films is what really solidified PUFF 2 as above and beyond last year’s festival. It started with the short Death Metal, directed by Chris McInroy, which is undoubtedly mankind’s greatest artistic achievement, period. Without spoiling anything, it’s the most absurd, violent, moronic film about literally shredding with a guitar that you’ll ever see, and it’s absolutely amazing. It had the whole theater howling from start to finish. I want to watch it again 45 more times right now. This was paired with the final film of the night, the absolutely disgusting yet raucous good time that is Terrifier. Directed by Damien Leone, and an expansion of his short film of the same name, Terrifier is a throwback to good-old-fashioned VHS-era slashers, updated with some of the most effective and vile modern make-up FX I’ve ever seen. The practical, hand-crafted nature of this movie makes it stand out quite a bit more than it would otherwise, but honestly the most impressive part of the whole thing is Art The Clown, as portrayed by David Howard Thornton. Previous to Terrifier, horror movie clowns were always psychopaths in clown costumes. Art the Clown is actually a clown – he “clowns” throughout the entirety of the film, adding all kinds of bizarre tension and humor to the proceedings that really make this unique. Ultimately, Terrifier is a gory titty movie that I could take or leave, but man did it leave an impression with its insane central performance and utterly vile practical FX. This is the kind of thing to have midnight screenings of with your friends come Halloween weekend.

All in all, PUFF 2 is off to a spectacular start and I cannot wait to see what they have in store for the rest of the weekend. I’ll be bringing you daily wrap-ups like this one all weekend, and perhaps some more comprehensive reviews of the movies themselves. Happy Halloween season y’all!